The grind of a blade refers to the shape of the cross-section of the blade. It is distinct from the type of blade (e.g., clip point or drop point knife, sabre or cutlass, axe or chisel, etc.), though different tools and blades may have lent their name to a particular grind.

Grinding involves removing significant portions of metal from the blade and is thus distinct from honing and polishing. It is notably done when first sharpening the blade or when a blade has been significantly damaged or abused (such as breaking a tip, chipping, or extensive corrosion) A well maintained blade will need less frequent grinding than one which is not treated well.

An appropriate grind will depend upon what the blade is to be used for and the material from which the blade is made. Knife manufacturers may offer the same model of knife with different grinds on the blade and owners of a blade may choose to reshape it as a different grind to obtain different blade properties. A trade off exists between a blade's ability to take an edge and its ability to keep an edge. Various grinds are easier to maintain than others or can provide a better shape over the life of the blade as the blade is worn away by repeated sharpening. In material science terms, harder steels take sharper edges, but are more brittle and hence chip more easily, while softer steels are tougher, and are used for knives such as cleavers which must be tough but do not require a sharp edge. In the range of hardnesses used for knives, the relationship between hardness and toughness is fairly complex and high hardness and high toughness are often possible at the same time.

As a rough guide, Western kitchen knives generally have a double-bevel (approximately 15° on the first bevel and 20-22° on the second), while East Asian kitchen knives are made of harder steel and are ground at 15-18°, being either wedge-shaped (double-ground) or chisel-shaped (single-ground).

A sharp object works by concentrating forces which creates a high pressure due to the very small area of the edge, but high pressures can nick a thin blade or even cause it to roll over into a rounded tube when it is used against hard materials. An irregular material or angled cut is also likely to apply much more torque to hollow-ground blades due to the "lip" formed on either side of the edge. More blade material can be included directly behind the cutting edge to reinforce it, but during sharpening some proportion of this material must be removed to reshape the edge, making the process more time-consuming. Also, any object being cut must be moved aside to make way for this wider blade section, and any force distributed to the grind surface reduces the pressure applied at the edge.

One way around this dilemma is to use the blade at an angle, which can make a blade's grind seem less steep, much as a switchback makes a trail easier to climb. Using the edge in this way is made easier by introducing a curve in the blade, as seen in sabers, scimitars, and katana, among many others. Some old European swords (most memorably Hrunting) and the Indonesian style of kris have a wavelike shape, with much the same effect in drawing or thrusting cuts.

When speaking of Japanese edged weapons, the term niku refers to the grind of the blade: an edge with more niku is more convex and/or steep and therefore tougher, though it seems less sharp. Katana tend to have much more niku than wakizashi. If it is required to measure the angles of cutting edges, it is achieved by using a blade edge protractor (or goniometer) see CATRA Hobbigoni.

Blade Bevel. The ground-away portion of the knife blade that tapers from the spine to the edge. Note that the blade bevel does not include the cutting edge called the edge bevel.

Chisel Grind.  As on a chisel, only one side is ground (often at an edge angle of about 20 - 30 degrees); the other remains flat. It's easy to produce and easy to sharpen. It is often ground at around 30 degrees which contributes to a thin and sharp edge.  The majority of Emerson Knives have the chisel grind.  As many Japanese culinary knives tend to be chisel ground they are often sharper than a typical double bevelled Western culinary knife. (A chisel grind has only a single edge angle. If a sabre grind blade has the same edge angle as a chisel grind, it still has two edges and thus has twice the included angle.) Knives which are chisel ground come in left and right-handed varieties, depending upon which side is ground. Japanese knives feature subtle variations on the chisel grind: firstly, the back side of the blade is often concave, to reduce drag and adhesion so the food separates more cleanly; this feature is known as urasuki. Secondly, the kanisaki deba, used for cutting crab and other shellfish, has the grind on the opposite side (left side angled for right-handed use), so that the meat is not cut when chopping the shell.

Concave Grind.  Similar to the flat grind in that the blade tapers from the spine to the cutting edge, except the taper lines are arcs instead of straight lines.  It is the easiest grind to keep sharp, but has a weak edge that will chip easier than most other grinds.

Convex Grind.  Similar to the flat grind in that the blade tapers from the spine to the cutting edge, except the taper lines are arcs extending outward instead of inward as in the concave grind above or straight lines. If you picture a pumpkin seed, you will get a good idea of what the cross sectional view of this grind is like. Noted custom knife maker Bill Moran is credited for bringing the convex grind into the focus of knife making. Such a shape keeps a lot of metal behind the edge making for a stronger edge while still allowing a good degree of sharpness. This grind can be used on axes and is sometimes called an axe grind. As the angle of the taper is constantly changing this type of grind requires some degree of skill to reproduce on a flat stone. Convex blades usually need to be made from thicker stock than other blades. This is also known as 'hamaguriba' in Japanese kitchen knives, both single and double beveled. Hamaguriba means "clam shaped edge".

Double Bevel or Compound Bevel.  A back bevel, similar to a sabre or flat grind, is put on the blade behind the edge bevel (the bevel which is the foremost cutting surface). This back bevel keeps the section of blade behind the edge thinner which improves cutting ability. Being less acute at the edge than a single bevel, sharpness is sacrificed for resilience: such a grind is much less prone to chipping or rolling than a single bevel blade. In practice, double bevels are common in a variety of edge angles and back bevel angles, and Western kitchen knives generally have a double bevel, with an edge angle of 20-22° (included angle of 40-44°).

Double Flat-ground.  A blade that is ground flat on both sides of the blade, tapering to an edge with no radius.

Flat-Grind (Full).  A knifes edge that tapers from the cutting edge all the way to the blades spine that is ground completely flat without a radius. The blade tapers all the way from the spine to the edge from both sides. A lot of metal is removed from the blade and is thus more difficult to grind, one factor that limits its commercial use. It sacrifices edge durability in favor of more sharpness. The Finnish puukko is an example of a flat ground knife. A true, flat ground knife having only a single bevel is somewhat of a rarity.

Hollow-ground.  Edge that is ground with a radius leaving a concave shape above the cutting surface.  The most common grind, found on the majority of custom and production pieces. Hollow ground blades have a thin edge that continues upwards, and the grind is produced on both sides of the blade. Since the cutting edge is relatively thin, there is very little drag when cutting.  This is also characteristic of straight razors, used for shaving, and yields a very sharp but weak edge which requires stropping for maintenance.

New Grind.  This term describes a knife that has an even taper from the back of the blade to the tang. It was used on some Case knives in the mid 80's.

PlainEdge.  A sharpened knife blade with no serrations or teeth. Sometimes called a smooth blade.

Sabre Grind.  The sabre grind has flat edge bevels that typically begin about the middle part of the blade and runs flatly to the edge. The edge is often left thick and thickens quickly past the edge. This is a great grind for chopping and other hard uses. Also named "Scandinavian Grind", it produces a more lasting edge at the expense of some cutting ability and is typical of kitchen knives. Also sometimes referred to as a "V Grind", made with strength in mind and found on tactical and military knives.

Scandinavian Grind or Scandi Grind.  The Scandinavian Grind is a wide flat bevel that runs to the edge of the blade. There is little or no secondary bevel. The primary angle is engineered to match the quality of the steel and intended use. The result is a very keen edge that provides excellent control of the cut. The downside is that a full Scandinavian edge is fragile.

Single-Bevel Grind.  Also called a chisel grind. The edge is either flat or hollow ground, but only on one side.

Smooth Blade.  A sharpened knife blade with no serrations or teeth. Sometimes called a PlainEdge.

SpyderEdge.  Spydercos two-step serration pattern of one large and two small serrations. This pattern increases the cutting edge by 24%.

Wavy Edge. Wavy edge is a term used by Victorinox/Forschner for their kitchen knives that have serrations.

Zero Grind. Similar to a full flat grind without the secondary grind for the edge.

Zero Saber Grind. Similar to a flat saber grind without the secondary grind for the edge. 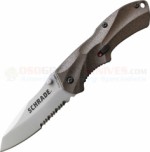