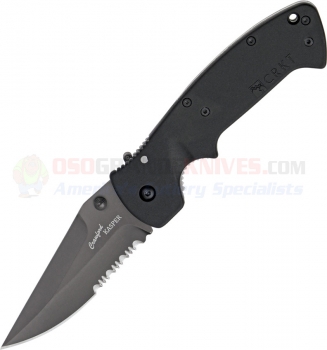 CRKT 6783Z Crawford Kasper, Gun Metal Gray Blade, ComboEdge. This Crawford/Kasper designed knife from CRKT is no longer made and it is for sale at close-out prices. It is an excellent design with superb construction specifically made for close quarters combat, but also lends itself useful for other general purpose chores. The blade has a tactical gun metal finish with a ComboEdge and dual thumb studs. The handle is a Kasper design with finger grooves and jimping on the blade spine. The zytel scales are set over a thick stainless steel liners with a lock frame. With CRKT's patented AutoLAWKS system effectively transforms the knife into a virtual fixed blade. Includes tip-down pocket clip.

Knife is great, I have 3 others for emergency kits. Knife is solid, came fairly sharp out of the box (I reprofiled the edge though - personal preference), no play side to side or front to back. My only complaint is that you cannot loosen the blade screw. It was assembled so tight that I would have to strip the screw to try and remove it. My other three were not like that. For $20 bucks you can't complain though. Will toss it in a BOB but could not use it in a tactical situation due to blade deployment is not fast. If this knife is used and starts to get blade play it could not be tightened for reduce it. I almost returned it due to this, but like I said, for $20 I can't complain. CRKT builds great knives at a good price point. Would recommend this knife to others.
Jack Chapman on 04/17/2015 01:48pm

A good solid EDC knife. For someone like me, who thinks bigger is better this knife is perfect. Holds an edge and sharpens easily. A real good work knife.
Darrell Brant on 10/03/2014 08:51am

This is one of the best folders for any amount of money! I've had mine for four years now and it has been great. I work construction and have used (abused) this blade for every task imaginable. It is still as solid as the day I bought it. I sharpen it probably about twice a month (super easy). Lock this thing open and it feels as solid as a fixed blade. I recommend this knife to anyone who may be looking for a good blade for actual tasksnot just looking cool and pretty.
Related Products

Thanks for the great customer service!
--Dakota N. - Allenwood, NJ