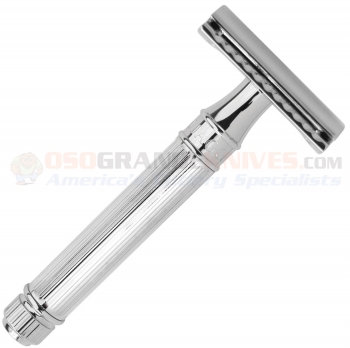 About Edwin Jagger: Edwin Jagger sets the standard for impeccable male grooming. Established in 1988, they are a family-run business where integrity, promise and inspired design go hand in hand. Their unique appeal has much to do with the personal input of the owner and founder, Neil Jagger, who designs every piece with absolute attention to detail and the highest standards of manufacturing. Edwin Jagger exemplifies traditional English quality style combining it with state of the art design, up to the minute manufacturing techniques and the heritage of long established Sheffield craftsmanship.

Just amazing. I tried many DE razor 's before finding the right one and this is it. Had my first shave this evening with this razor and I can say it's the best shave I have had with a DE razor. I was not too sure with the short handle at first but once you get use to it the weight distribution between the head and the handle makes perfect sense. I would highly recommend this for a beginner in the world of DE wet shaving.
Brett on 08/02/2012 10:47am

Fantastic Razor!!! I've been using the Edwin Jagger for about 3 months now. I can't say enough good things about it. I would imagine that every Double Edge razor is a little different but this one works well for me. It has a nice weight and is simple to take apart/reinstall blades on. I've only cut myself once when I was in a big hurry for work and that was my fault to be honest. I really enjoy the closeness of the shave. It's also nice being able to toss blades at the first sign of dullness due to how affordable they are. I would say it will pay for itself in the first month when you consider how expensive "Mach whatever" type blades cost. Take your time the first few shaves and maybe even watch a Youtube video if your really nervous, but you'll quickly get the hang of it and be shaving just as fast and close as you where before with a better looking razor and blades that you can afford to toss after every shave if you want!
Rich Guzman on 06/15/2012 03:02pm

I purchased this razor after reading many positive reviews about it. I don't have a really heavy beard but I need to shave every day for work. I have been wetshaving for some time and I own two Merkur razors. This razor is as good or better than the Merkurs. It is well made and exceptionally well finished with the shiniest chrome finish I have ever seen. I purchased it because it was reported as a mild shaver which was very forgiving. It gives an excellent and mild shave that gets me as close as anything else I have ever used. I have the model with the lined chrome handle which is very easy to grip and hold. I've seen the same model advertised with a plastic accent on the handle but I thought they might tend to be slippery so I passed on them.

This razor is an excellent product for me and I don't think it will disappoint anyone else.

I bought this razor because I was tired of throwing away disposable razors after only ONE SHAVE! Based on the combination of reviews and what was available at Oso Grande for next day shipping, I decided on this Edwin Jagger #DE89LBL safety razor.

I couldn't be happier! The razor is beautiful- ornate and shiny, better than I expected for the reasonable price. The DE89LBL has all metal parts and they all appear to be chrome plated. After six months of use, the razor still looks brand new. I find that the blades (Derby) that come with the razor maintain a good edge for about one week for me so I make it a point to change blades once a week. The longest I've gone without changing blades is 3 weeks... it still shaved but it took longer and tended to grab the hairs more. Also at the great price of $12.49 for a 100 pack of blades it only ends up costing me .125 cents per week or $6.50 per year for my blades!!! This will definitely save you money and be good for the environment as the blades are biodegradable.

The handle does not feel cheap and flimsy and the weight of it is fantastic once you get used to it. I cut myself once on the first shave, but that was because I am so accustomed to jamming a blade against my face to get a 'close' shave. With a 3 day beard I now only need one pass to look shaven, and 2 if I really want to impress my wife with soft, smooth skin.

This is a great blade for beginners (I had never once used anything but a disposable) and it has already payed for itself in one month of not buying disposables in bulk from costco! This is a no-brainer, buy it now! You'll be glad you did.

I've had my blade since December and I absolutely love the finish and look of this razor. So far the finish looks as good today as it did when I got it and it holds the blade securely. I highly recommend this razor to anyone.
Wrangler on 04/20/2012 07:52pm

The best Double edge razor for the money!

This is by far the best Double Edge razor that you can buy today. The head has been engineered to provide an incredibly smooth and slick shave. I had originally bought a Merkur HD to start my DE shaving revival but was never happy with it as the HD is a bit more aggressive and harsher. And the finish is nearly as nice as the Jagger.

Edwin Jagger has several versions with longer handles (Chatsworth) that others (like myself) prefer, but this is the basic unit and will perform just as well.

"I started wet-shaving with a DE about two months ago. The heavily marketed Merkur 33C came out tops and I bought one. Imagine my dismay when I found out how small it was. It shaved ok - but nicked me several times (once taking a patch of skin off). Thanks to other reviewers here, I bought one of these Jaggers and had my first shave with it this morning using one of the Derby blades provided - I now have firsthand experience with what a good shave means! No nicks - 3 passes in the same direction - and it gave me an extremely close shave without burn or nicks.

PLEASE - if you are new to ""wet shaving"" try these first - the couple of extra dollars you spend will be so worth it. "

This is a high quality razor. I recently returned to "wet shaving," a luxury if you have the time to properly prepare your whiskers. The reviews about this razor were spot on: a balanced weight (important for a good shave and control) and well-crafted. This design requires removing the head to install the blade, as opposed to a "butterfly" head that opens by twisting the razor's handle.

I have since found a couple of vintage razors at the local flea market that I cleaned and oiled and prefer. If, however, you want a brand new razor, spend the money for one of this quality. After all, it's your face, and this one will last like an heirloom. It comes with five Derby blades, a fine complement to this particular razor. Good shave!

I purchased this razor after reading positive reviews about it. I don't have a really heavy beard but I need to shave every day for work. I have been wetshaving for some time and I own two Merkur razors and a Parker. This razor is as good or better than the Merkurs. It is well made and exceptionally well finished with the shiniest chrome finish I have ever seen. I purchased it because it was reported as a mild shaver which was very forgiving. It gives an excellent and mild shave that gets me as close as anything else I have ever used. I have the model with the lined chrome handle which is very easy to grip and hold. I've seen the same model advertised with a plastic accent on the handle but I thought they might tend to be slippery so I passed on them.

This razor is an excellent product for me and I don't think it will disappoint anyone else.

The razor is well-made, elegant and completely functional. Everything I expected. The shave is close but not aggressive. Service was fast and easy.
C Tom Tuzza on 01/20/2011 11:56am

I've owned numerous DE (Double Edge) razors including vintage Gillettes and the Merkur 33HD. Some wet shavers enjoy having numerous razors in their rotation, but I really just wanted to find one great razor. I found it in the EJ. The EJ shaves much smoother than the Merkur, and shaved better than just about any vintage Gillette I owned. I decided to sell the only razor than came close, a Gillette Rocket HD, because it was a $75.00 razor that I happened to pick up for $10.00.

I highly recommend this razor to beginners and experienced wet shavers. The finish is amazing, and much nicer than the Merkur. The only concern was the handle, but so long as there is no soap on you hand or the handle, the grip is fine. Great razor!

Shipping was fast and the person who took my order was friendly and easy to understand. I will be back. 5 Stars!!!!!
--Patrick - Austin, TX 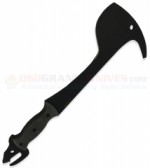