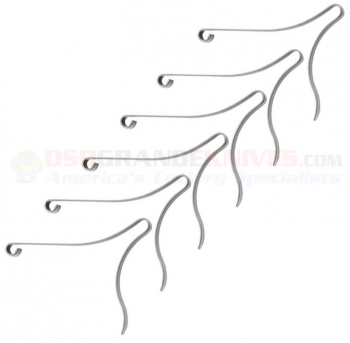 Coming Soon! Pre-Order Now.
Order now and we'll deliver when available.
We'll update when it becomes available.
Your account will only be charged when we ship the item.

After Homeland Security, snapped scissors springs are my biggest cause of lost penknife function. These replacements work great against one of these threats. I actually found that using two needle nose pliers made it a lot easier to install these, after removing the old spring. The trick is to get the spring aligned squarely next to the hole so that it just slides in with a little push from the second pliers. If it's sitting at an angle it won't slide in. The photo shows the new spring being held in place so the curled part of the spring is aligned with the hole at the base of the scissors. Once you get this far, you come in with the second pliers (or perhaps finger - I didn't try that) to push it home. How gratifying to be able to repair and extend the lifetime of a gadget rather than dispose and replace!
Tim M. on 01/27/2015 08:13pm

I could not have been more pleased with Oso Grande Knives! Very easy to do business with, extremely fast shipping, great selection and great prices.
-Brett H - Ocala, FL 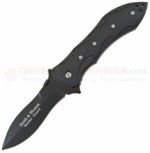