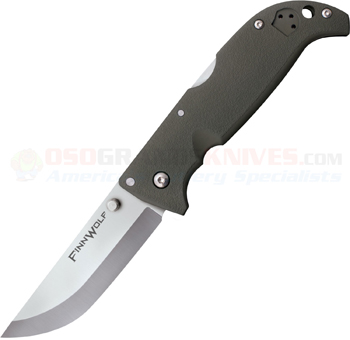 Cold Steel President Lynn C Thompson has always admired the sleek lines and dependable, highly functional blade shape of the classic Pukko. Ever since their inception in 1980, this classic Finnish hunting, and utility knife has never been far from his thoughts.

Over the years, Cold Steel has released numerous versions of the Pukko, and now, in a design collaboration with custom knife-maker Andrew Demko, Lynn is proud to introduce a folding Pukko - the Finn Wolf!

Taking the classic Pukko as inspiration, Andrew Demko brought his engineering genius to a hard-working folding bushcraft knife. Thin, super lightweight, easy to carry and even easier to use, this modern EDC (Every Day Carry) knife is perhaps the perfect everyman knife.

Equipped with the Tri-Ad lock, adding new levels of safety and security, the Finn Wolf is utterly impervious to shock, making it reliable in the toughest, most uncompromising conditions.

Its satin polished Japanese AUS8A blade is ready to put in long hours and hard work, and, with its keen zero ground edge it's a breeze to re-sharpen.

With this much performance packed into this comfortable, strong, practical and inexpensive a package, there's simply no excuse not to add one to your collection today!

Feels great in the hand and has a very stable lock when it is open. The scandi grind is not as sharp as a razor but it is much much more durable and holds an edge longer. It does not sit low in the pocket however, the pocket clip allows the butt of the knife to stick out a good bit which makes grabbing it easier but it is more prone to snagging and it is more noticeable.
Fred on 09/20/2021 02:25pm

Absolute crap steel. Stay away. Cheap plastic grip. Strange lock and hard to open. No service when steel chipped on regular woodwork in birch.
Jared Campbell on 01/22/2018 07:05am

One of the sharpest knives I ever got straight from box. Great design and feel but, had I known there were no liners I would not have purchased. I can find cheap Pakastan knives with liners that add to the strength of knife. Cold Steel you ALMOST got it right. I will stick with my Buck and Boker, Kershaw from now on.
Alex Shepard on 08/20/2015 03:56pm

This knife looks good with the OD green handles and its extremely sharp. Its the sharpest out of the box blade I've ever seem. Great job Cold Steel!
Andrew Shaw on 05/18/2015 04:19pm

Here is my review also found on wordpress.

Does the name of a product make you like it more? Does it really matter? Do me a favor, look at the CS Finn Wolf and imagine it as being named, "The Happy Camper". Doesn't have the same effect does it? Nope, because CS puts some work and strategy into naming their products.

In doing so, a lot of hype was created when it was released last year; news about a true scandi folder with a triad lock was quite the buzz. I'm going to write today about whether it lived up to the hype or not.

CS is a company that is polarizing due to their extreme advertising and owner's attitude about weaponry. As for me, I don't give a rats. I want a quality product at a good price that in one way or another supports American jobs.

This review needs to be short or you'll stop reading, so first check out the details:

I'm going to start right where a person shouldn't when doing a blade review, the pocket clip. It's ambi for left or right, tip up only as it should be in my very personal opinion. And it is personal, don't ask me about it, it's that personal. The pocket clip isn't ultra deep carry or super obvious, it's a nice medium. It's real shiny which matches the blade so that's just fine. Oh and by the way, it's not as tight as the recon or any other g10 CS knives clips were, so it won't ruin your pants.

Next, let's talk about another part of the knife out of order since I like doing things wrong; Deployment. No quick deployment possible. Simply put, it's a functional thumb stud for left or right handers but even with the relief cut in the Griv-Ex scales, it doesn't allow your nail to sneak in for a fast flick. This shouldn't be a problem since this knife isn't designed for tactical applications as I see it. Carry the right knife for the job. The knife comes out of your pocket easy enough though so it's not hard to get from pocket to open and locked in under 2 seconds, one handed of course.

Blade Steel. Man I'm not sure how to go about this. I've had most AUS8 CS knives none of them came this sharp and none of them dulled, curled, bent, and rolled as easily. The first day I had it the edge rolled making feather sticks. This is light activity for any Mora (which is a competitor in some ways). At a price of 40.00, I expect that the heat treat and hardness of this steel should have been figured out better. My worksharp corrected it quickly, but I was depressed to see such a failure on a knife that has so much potential. Either the angle of the scandi, the heat treat, or maybe it's just this knife I received was bad. My opinion is that maybe it's a combo of all those things. It came so sharp and thin that I was worried about that happening, something to consider if you don't have sharpening capability. Either way, this was a big hit against the knife. I guess this is not something to even dare light batoning on.

Ergonomics on this knife are decent enough. It's a pocket knife and it has to fit nicely in a pocket so it's going to be fairly flat inherently. It's a little hard to hold onto for a long time because of 2 things. Those being the pocket clip digging into your hand and the thinness of the knife scales which make you grip tighter onto that pocket clip-- not perfectly comfortable. Here's the thing though, it's a folding knife with a triad lock, it's not a fixed blade Helle that is 3 times the price. The scales are Griv-Ex as previously mentioned, they are a little slick but not too bad. More soft than other Griv-Ex, but not as soft as some wood and for sure not as comfortable as rubber. I worked on some spoons, feather sticks, notches, box cutting, de-limbing small trees, and striking a fire steel to which I decided I'm okay with ergonomics overall. I used it about a half hour at a time consistently and it did make some sore spots on my hands, but compared to most other folders it was much better. Consider this though, the Op #9 folder is $10.00 and achieves better carving ergonomics for your hand.

Fit, Finn-ish, and Ascetics (yes pun intended) looks great and actually quite quality as it was shipped to me. Clean, well put together, no grit in the locking, smoothing functioning is the result. The curves and bushcrafty feel is what is going to sell this knife for CS. I only wish they didn't mark the knife and the pocket clip with the Cold Steel logo, it's redundant advertising on their part. I love the FINNWOLF text on the blade, it's pretty well done and attractive.

Overall I must admit I am still in a trial and error relationship with the knife. I've never had that with a CS knife. I always immediately loved them, but this one has to earn its keep for me. The bad rolling and bending edge really bothers me when I spent 40.00 on a knife that seems softer than my Op #9. On the other hand, this knife has many attractive features and is scary sharp once I fixed it with my worksharp. I will also mention it has kept a better edge after a minor re-profile, but it's still not as strong as it should be. I like this knife, I really like the direction and thinking behind most of it.

Cold Steel: it's a decent and quite attractive knife, but keep an open eye for complaints in steel quality in case there is a consistent problem there. Keep up the bushcraft tools at good prices, and get creative with colors, I really like this OD type green. You are a company I trust and will continue to hold to a high standard because of the quality items I've previously purchased.

One point removed for minor ergonomic misses that will bother most people such as scale thinness and handle shape, scandi knives aren't usually that flat for a reason, even if it's a pocket knife give it some girth in my opinion. Two points were removed for rebuke-able steel rolling. If that problem persists for me I would remove another three points but I'm only taking two points away in good faith that the minor re-profiling I did saved it. Really fun knife!

FIVE STARS FROM ME! I ordered internationally without a hitch whatsoever. Many thanks for the prompt and professional, yet friendly delivery--much appreciated. May your tribe increase.
--Dan M - Victoria, BC Canada - Reselleratings.com