The Ek Commando Knife Co. is a combat knife manufacturer that was founded by John Ek in 1941. The Ek Commando Knife Company got its name from the World War II Allied Commando units, such as the US Marine Raiders, First Special Service Force and British Commandos who were highly respected for their hand-to-hand combat and knife-fighting abilities. Ek Knives have been manufactured since 1941 and battle proven through WWII, Korea, Vietnam, the Gulf War, Afghanistan and Iraq. The thousands of letters John Ek received during his lifetime from satisfied Soldiers, Marines, Sailors and Airmen was the ultimate satisfaction for this patriotic American. John Ek's name, his knives and the Ek Commando Knife Co. live on today as a legacy of his ideas, his skills and his patriotism. KA-BAR is proud to be the living link between the tradition of John Ek and the Ek Commando Knife Company. 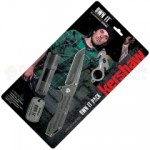