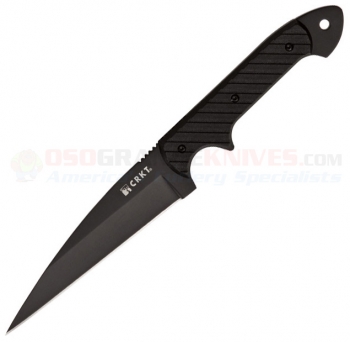 This product is no longer available, but don't go just yet.

Columbia River 2010K Crawford Kasper Dragon Combat Knife, Wharncliffe Blade, Black PlainEdge. Bob Kasper, the late writer and combat instructor, designed the basic outline of the C/K Dragon after ten years of study into the principles of extreme in-close fighting developed by Dr. Gordon Eric Perrigard over fifty years ago. These techniques use automatic conditioned reflexes with minimal body movement. The knife is considered as part of the hand.

Bob sent his sketch to award-winning custom knifemakers Pat and Wes Crawford of Crawford Knives in West Memphis, Arkansas, who developed the handle scales. As Pat Crawford says, This knife is all business. I hope it will become a part of Bob's legacy to the professional martial arts community.

Like its namesake, the C/K Dragon bites (with the tapered tip), claws (with the long Wharncliffe cutting edge), and strikes (with the pommel) its adversary. We at CRKT have engineered our production model to be as close as possible to the Crawford custom Dragon, which has proven popular with law enforcement and military operators.

The 4.50 in. full tang blade has a tapered Wharncliffe grind for great penetrating power. It is made of exceptionally tough 9Cr18MoV high-chromium stainless steel to stand up to the worst abuse.

The handle features a deep finger choil and textured G10 scales with deep diagonal grooves for optimum grip with gloved hands and under wet conditions, aided by deep friction grooves at the thumb. At the pommel, a pointed metal hammer tip is useful for window breaking and other tactical impact needs.

True to Bob Kasper's concept, this is a knife with perfect balance that truly feels like part of your hand. Mass is centered at the palm, and the tapered blade tip makes the Dragon feel like a much smaller knife.

We've designed a lightweight Kydex sheath with a patented* multi-position clip, which can be attached for vertical or horizontal carry on belts, webbing or equipment. Using the MercHarness, it can be carried comfortably under the arm. There is also a hole at the butt of the knife for a lanyard or fob.

Despite its tactical intentions, we have found that thanks to its weight, balance, grip and long precision cutting edge, the Dragon makes a very functional and versatile knife in the shop, too. Enter the C/K Dragon.

Great blade, great grip, its lighter than you would think by looking at it. i have been using it as a kitchen knife with great results thus far.
greg poorman on 07/29/2017 12:32pm

This is one of my favorite knives. It's simple, deploys easily and is well balanced. You have to hold it to appreciate how cool it is. The straight edge makes it the perfect camp knife as well.
Jake Lovemore on 12/28/2015 09:27am

Soon as I got this 'Lil razor' out the box, dull as a fuckin baseball bat so, I took my smith's dual sided diamond sharpener out, once each side on the coarse sliced my thumb felt great, two times on the fine side ta polish it down an now I need stiche! I beat the holy hell outta these an no breaks no bent over tip or blade. so I ordered 12. I need more stiches.
Marshall woodall on 11/20/2015 12:35pm

Awesome Knife! Love how you can put it almost anywhere. Good strong blade. Very happy with it! I recommend it to anybody who hunts, bush walks or even for around the campsite.
John Currens on 08/26/2014 04:48pm

The reason i bought this particular knife, was because of its look. It's like a straight fang from a large beast. The condition that it came in was great. The box was new and unopened. Upon opening it the blade was nice, clean and sharp to the touch. Looking to make this a matching set and looking forward to buying more CRKT knives in the near future.
Related Products 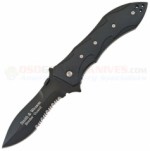