Ken Onion - "Though I have been a devout knife collector since childhood, collecting mostly production knives and anything else I could find, I was unaware of the custom knife industry until 1989 when I saw an issue of Knives Illustrated at a local drug store. From there I found a local knife maker named Stan Fujisaka and begged him to teach me. I made my first knife in November 1991 and have continued the craft since. While recovering from back surgery in 1996, I decided to try to design a folder that was easier to manipulate than what was available, and not a switchblade. The result was the first assisted opening knife I called "Speed Safe" After finding some information on the whole patent process and consultation from an attorney, I got my first patent, creating a whole new category of knives between manual and auto." 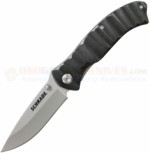