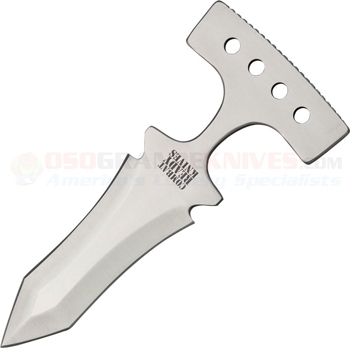 The Combat Ready push dagger knife is a sleek design with a broadsword-style double-edged satin finished blade and a compound bevel grind. The handle has jimping along the rear edge which enables a sold grip of the knife. Comes complete with a black nylon sheath with velcro closures that hold the knife securely in place.

For the price point, this push dagger isn't bad, but this push dagger is a lower end push dagger. I'm not trained in push dagger tactics and have never seen any official manual of arms for use of these devices. I have a few thoughts after having handled several of them from different manufacturers.

My first concern with a push dagger is what happens if I make a hard punch and hit something that doesn't give. Will my fingers slide forward and be cut badly on the rearward edge of blade? Will my fingers move forward and be broken on back flat of the blade? The handle on this one is large enough that I don't think my fingers would slide forward and be cut, but maybe they would be bruised badly against the flat part at the back of the blade. To avoid this problem, the manufacturer would need to add padding to the back of the handle or increase the length of the handle. I'd feel safer hitting someone's sternum with this push dagger than I would with others on the market, but I'd certainly prefer some higher end models for a real fight.

This dagger is not particularly comfortable at any grip position, but much less comfortable with the handle between the ring and middle fingers than between the middle and index fingers. I'd expect a push dagger this big to feel equally comfortable in either position. I haven't tried wrapping the handle in paracord, but the holes in the handle could make that kind of wrap feasible and a big improvement in comfort.

The blade isn't particularly sharp. The point is sharp enough to do what a push dagger is made to do. The straight edges from the top to the curved portion of the blade don't feel sharp at all. The curved portion feels slightly sharper. If a thrust hit an opponent, the sharpness should be enough for good penetration, but if someone needed to slash at an opponent, this dagger wouldn't cut as well as many others on the market. The blade geometry would seem to have some slashing advantage, but the sharpness isn't there. I haven't tried sharpening the blade to see how much improvement can be made.

Just as shown in the photos, the sheath is nylon with a metal clip. The inside of the sheath has an insert that may help protect against the edges cutting into the sheath. As sheaths go for this style and price of push dagger, this one is pretty good.

If you like the idea of having push daggers readily available in numerous places for self-defense, this one is adequate enough and would allow you to buy several without too much pressure on your wallet. If you landed a good stab on an opponent, the three and a half inch blade would do real damage. A sharper blade might penetrate a leather coat more effectively, but against a fabric of lesser toughness, this blade should do well enough. This push dagger is a budget weapon, but budget weapons have their place.