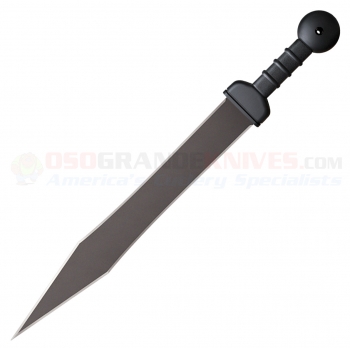 Derived from the sword used by Celtic tribes of ancient Iberia (Spain) and adopted by the Roman Legions, the Gladius, with its long, narrow point and wasp waisted blade, was the scourge of the battlefield and often the last thing seen or felt by Rome's enemies. Ever popular, the Gladius is still in demand almost 2000 years later and is one of our most frequently requested swords to make, so we have decided to offer a modern version of this ancient classic in a very affordable machete/sword format. Made from 1055 Carbon steel and hand sharpened to a murderous point and wicked edge, it offers 19" of unprecedented piercing and slashing power at a bargain price. Sporting an extra wide, full tang for strength and a classically inspired handle, it offers the standard guard and ball shaped pommel of years gone by. Made of high impact Polypropylene, it's impervious to the elements, rugged beyond belief and most importantly, comes compete with a sturdy Cor-Ex sheath and belt loop.

I saw the Forged in Fire show where they tried their best to damage a Cold Steel Gladius with other hand made swords and they all failed to hurt what they considered to be a cheap made sword. When they failed to bend or break the Cold Steel Sword I knew then that I had to own one. I would not sell it for a hundred times what I gave for it.
Sky S on 02/23/2016 01:13pm

This is a great sword. Nice and sharp. There were some burrs, but they came off easily enough. Nice balance and weight. Sweet product and a nice price.
G Scott on 02/20/2015 12:43pm

The Gladius is essentially a modern version of the Roman sword. It's a nice weight and sharp out of the box. This Gladius is a good price and carries that Cold Steel rep well.
Related Products 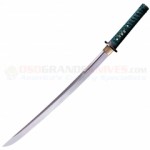