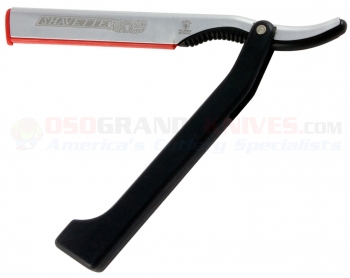 Dovo 201 081 Shavette Straight Razor, Black Handle, Germany. The Dovo 'Shavette' is a straight razor made by Dovo that takes disposable blades. Each model comes with a #201003 red blade holder, which is the default mechanism that accepts a half of a regular "DE" blade (just snap the blade in two and it pops right in). There are three blade holders available for the Shavette that slide into the Shavette. The red one takes regular Double Edge razor blades snapped in half. The black one takes the longer versions of Double edge blades made by Dovo. There is also a green blade holder available that accepts the same rigid backed single edge blades used by Fromm and other disposable straight razors.

I love this razor! I like the protection it has at the tip of the blade that keeps me from nicked during the shave.
Peter Giardina on 06/15/2012 01:34pm

I used this razor for the first time and got a really close shave with only had a few minor nicks. I'll get better with practice and overall I think this is a very nice low cost razor to learn how to shave with a straight razor.
Related Products

I was very impressed with the service from Oso Grande Knife and Tool. The delivery was very fast.
-David F - Corvallis, MT 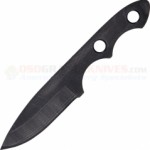