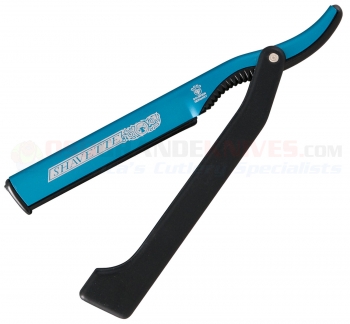 Dovo 201 0140 Shavette Straight Razor, Blue with Black Handle, Germany. The Dovo 'Shavette' is a straight razor made by Dovo that takes disposable blades. Each model comes with a #201003 red blade holder, which is the default mechanism that accepts a half of a regular "DE" blade (just snap the blade in two and it pops right in). There are three blade holders available for the Shavette that slide into the Shavette. The red one takes regular Double Edge razor blades snapped in half. The black one takes the longer versions of Double edge blades made by Dovo. There is also a green blade holder available that accepts the same rigid backed single edge blades used by Fromm and other disposable straight razors.

I love this razor! I like the protection it has at the tip of the blade that keeps me from nicked during the shave.
Related Products

Thank you for the excellent customer service! My boyfriend loves his straight razor and likes your website! You may have a new regular customer, he has an extensive pocket knife collection. :)
--Kimberly A - San Diego, CA