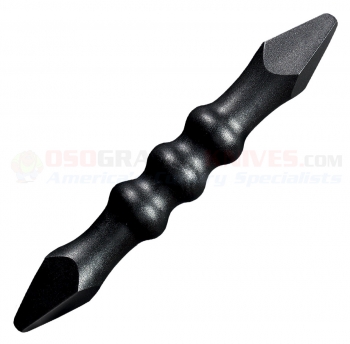 Made of virtually unbreakable plastic, the SD can increase the ability of the average person to defend himself several times over. With proper training, it can function as a fantastic aid in leverage when obtaining joint locks or submission holds. But where it really shines is as an intermediate impact tool. It's built for impact and, in a self-defense emergency it can become an efficient Yawara stick for driving off an attacker. You see, police and civilians alike face a perplexing dilemma when contemplating employing fist or baton blows. Blows struck with the fist may be too weak, or worse, result in a broken hand, while blows struck with a baton may be too powerful resulting in grave injury or even death. The SD however, solves this problem, neatly bridging the gap by concentrating and magnifying the effect of hand blows while minimizing the likelihood of permanent injury or death. If you're looking to expand your continuum of force options in a self-defense situation, we heartily suggest you buy a Koga SD.

Much better than the SD1 from all aspects (purchased both. I drilled a few holes in mine and got creative Shaw brothers style.
CreativeLife on 09/24/2021 01:00pm

Very easy to carry in pockets (pants, jackets, sweaters) or purse/backpack/fanny pack. I've even tucked it in my waistline of pocketless shorts when having to walk at night around the corner of my neighborhood with limited street lighting (I live in Detroit). Fits well in my small hand. EVERY woman is impressed to learn about it when they see mine and wants to get one as well. we live in the real world. I would advise women to carry it where it is easily accessible or in your hand when say walking to your car in a dark parking lot rather than inside a zippered purse etc as you won't have time to get it out if you NEED it in an unfortunate situation. PRACTICE striking with it in a hammer-like motion with FORCE cuz if you need to use it, the man who attacks you has ALREADY made the decision to harm you TERRIBLY and will not stop coming after you. Used properly, this could save your FUTURE and perhaps your very life.
Scott H on 08/30/2021 09:42am

Great emergency weapon! All is good and I have no complaints about it. It is a great little compact weapon that packs a tremendous punch. Love it.
Kirk Eagler on 09/05/2016 04:38pm

Very effective self defense tool especially if you have martial arts skills and training.
Brandon M on 09/29/2014 08:05pm

Great non lethal option, im just getting into kubatons and have seen several variations ranging from cylindrical aluminum keychains to larger steel ones with hidden blades in the end caps but then I saw the koga sd2 and was infatuated with the look and then I got it in my hand and man is this thing nice it fits my larger hand almost like a glove, even my nephew was impressed how well it fit his hand and he has smaller hands so this thing is a one size fits all, its made of a polypropylene composite so it is maintainence free and will last generations, there are tons of videos on youtube demonstrating techniques for kubatons (even a few from mr koga himself featuring the sd1&2!) And with some practice anyone can benefit from carrying one of these around should the appropriate situation ever arise, I like to carry mine in the change pocket of my jeans where it goes almost unnoticed, I definitely recommend this defensive tool to anyone interested and plan on picking another up for a female friend (and an sd1 to complete the set for myself!)
Related Products

Thank you for the excellent customer service! My boyfriend loves his straight razor and likes your website! You may have a new regular customer, he has an extensive pocket knife collection. :)
--Kimberly A - San Diego, CA