A Bowie knife is a style of fixed-blade knife first popularized by Colonel James 'Jim Bowie' in the early 19th Century. It was first made by James Black, although its common use refers to any large sheath knife with a clip point. The 'Jim Bowie knife' first became famous due to Bowie's use of a large Bowie knife at a duel known as the Sandbar Fight. The knife pattern is still popular with collectors; in addition to various knife manufacturing companies. From the Cold Steel Laredo Bowie to the Down Under Outback Bowie and everything in between we are sure to have a bowie you will love.  Oso Grande has over 200 Bowies and Bowie variations for you to choose from!

I'll definitely 100% will be ordering from this company again many times in the future as the products arrived in a very quick amount of time during the holiday season which is always impressive. I will be a lifelong client of this company.
--Marc P. - Whitby, Ontario, CANADA 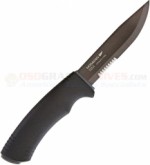